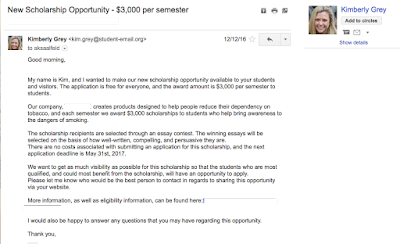 I received this email last month, and am finally getting around to blogging about it.  The email is from Kimberly Grey (kim.grey@student-email.org), and is asking me to post a link to a commercial site on my website because the company is supposedly offering an essay scholarship contest.

If you've read my past blog posts on these types of emails, you'll note a few departures from previous strategies.  In the past, the people that contact me posed as well-meaning students or volunteers who are letting me know about a great organization.  (They are actually paid marketers, promoting a client's website.)  They provide a link to a reputable, established organization, as well as to an unknown one.  The unknown one is a site that promotes their client's business.  For example, some of these sites claim to be sites devoted to helping people quit harmful substance addictions, but if you click around, you can find links to commercial products such as in-home drug tests, which I assume is the client's product. As I noted in a past blog post, the marketer is posing as a student or volunteer so that you'll be more likely to post the link to your resource page, because they know that if they were to email you and say that they're paid marketers trying to improve their client's SEO ranking, you would tell them to get lost.


...the marketer is posing as a student or volunteer so that you'll be more likely to post the link to your resource page, because they know that if they were to email you and say that they're paid marketers trying to improve their client's SEO ranking, you would tell them to get lost.

This email is more direct; the sender doesn't pretend to be a student or volunteer, and instead clearly states the name of the company (which I've removed to avoid generating traffic for them).  Instead, the new approach is apparently to get educators to post links to their client's website by claiming that their client is offering a scholarship.  In addition to this site, a couple of sites that I've dealt with in the past now say that they're offering scholarships, and one of them says that they've awarded a few.  I thought about trying to verify it, as one of the sites includes the names and academic affiliations of the students, but I'm not sure how I would be able to do that because FERPA would prohibit the schools from telling me if there is a student by that name enrolled there.  Isn't that convenient?  While I can't prove anything due to the aforementioned FERPA law, I strongly suspect that these scholarships do not exist.   Consider:

My organization awards an annual scholarship of $500 to the person who comes up with the best email reply to these obnoxious marketers.  The first winner of this scholarship (Spring 2016) is Rebecca Jackson, a student at the University of Nebraska-Lincoln.  Interested students should send a 200 word response to essaycontest@profesoraanita.com, and include their name, address, telephone number, email address, and the name of their school.*

It took a few minutes to actually set up the email address, but other than that, it took me about 60 seconds to create that paragraph and make up a fake name for a real school.  If I wanted to make it fancier and more convincing, I could create a new website and buy a new domain name for $10-15/year, and create content that would make it look like I am a non-profit organization awarding a scholarship. 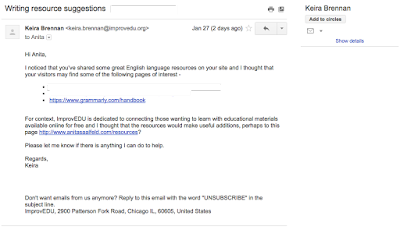 This email is from Keira Brennan (keira.brennan@improvedu.org).  When I go the domain website (http://www.improvedu.org/), it says its new site will be launching soon.  In the past, I've received similar emails that have been from "volunteers" from fake community centers. When I went to the sites, they mostly looked like they could be a real community center site, except they didn't include any information about the location of the community center.   So I suspect that www.improvedu.org is another fake non-profit.  Again, this takes very little time or money to create, and anyone can buy a .org domain.  I've included the site link here for two reasons:  First, the improvedu.org site is not the client site; this site is intended to make the request appear like it's coming from a legitimate source (rather than a paid marketing firm).  My other reason for including the domain name is that it will be easier for other people that receive these emails to find this blog post if I include the domain name.

The email from Keira included two apparently legitimate sites for English language resources, and a link to a grammar tutorial on a paper mill site.  I've left the link to grammarly, but the other link was for a paid curriculum, and while I believe it's probably fine, I don't want to generate traffic for a paid product site without knowing more about it. I guess I should congratulate Keira on the sheer audacity of asking an educator to post a link to a site whose sole purpose is to help students plagiarize.  Again, the purpose of asking people to link to these sites is that the more links these sites have, the higher they'll appear in a search ranking. So if you're an educator that maintains a resource page and you post a link to the paper mill site (even for the grammar tutorial), you're actually helping this site make money by making it easier for students to find it in a Google search.


So if you're an educator that maintains a resource page and you post a link to the paper mill site (even for the grammar tutorial), you're actually helping this site make money by making it easier for students to find it in a Google search.


If you're not familiar with paper mills, most sites will say that students should use the papers they purchase as a resource, and not submit them as their own work, but the purpose of the sites is for students to submit their assignment and have someone else write the assignment for them.

If you're an educator or curator of a resource page, I recommend not accepting link suggestions from unknown sources.  Most of them are not good resources in terms of content, and you may end up actually supporting something that undermines what you're doing in the classroom by including these links on your resource page.

Previous posts on this topic:
http://www.profesoraanita.com/2015/04/more-marketing-garbage-now-from-tobacco.html

Update on 3/21/2017:  I just received another fake scholarship email, this time from Lindsey Johnson (lindsey.johnson@sc-student.org).  If you've also received these emails, could you please leave the sender's name and email address in the comments?  It makes it easier for people Googling to see whether this is a real opportunity to find this page. 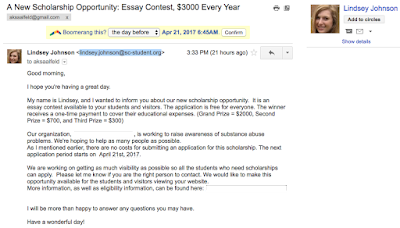 Update on 5/9/2017: I've received another fake scholarship email, from Jeniffer Lewis (jeniffer.lewis@uriemail.org; though note that in her email she says her name is Jennifer). As always, the link to the site offering the fake scholarship has been removed to avoid generating traffic for it.  The domain http://uriemail.org appears to redirect to http://my.uri.edu (University of Rhode Island). I've contacted the email abuse address to let them know that these spammers appear to be trying to misrepresent themselves as part of the University of Rhode Island. 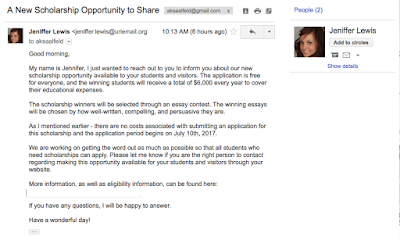 Updated on 6/13/2017: I've received a follow-up email from Lindsey Johnson asking if I'd had a chance to consider her previous email.  I forwarded her my two original email messages sharing my (very pointed) thoughts, and then replied with a new email proposing another tag for this post entitled 'Persistent stupidity.' Congratulations on the new tag, Lindsay!
Posted by profesoraanita at 5:13 PM 5 comments: